Back In The Day

This just cracked me up - way too many memories come along with this song! This was one of my favorite bands back in Jr high, my friends I would "sing" this song at the tops of our lungs. Believe it or not I knew all of the lyrics back in the day. Enjoy laughing at my memories!

In my last post I mentioned that Rob and I decided to have a homemade Christmas this year. We decided that since there was nothing we really wanted or for that matter needed, we would save our money so we could have some fun out in California in January. The presents we made are far more meaningful than anything we could have purchased and have helped us keep our focus on Christ rather than ourselves.

Here is what we made: 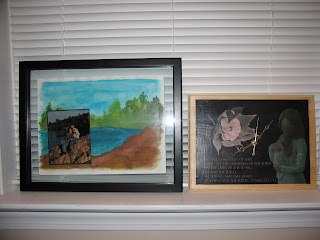 I did my very first watercolor painting inspired by our engagement photo and then put Song of Songs 2:16 "My beloved is mine and I am his" in the corner over the rocks. 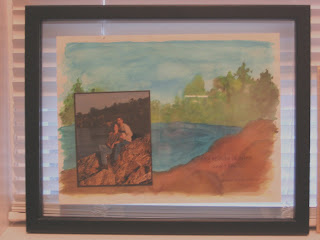 Rob made me a clock, and he even put a battery in it so it runs (that's an inside joke - I have a small clock collection and Rob made me take out all of the batteries because the ticking drove him crazy). The flower on the clock is a photo my nephew took and the verse is one of my favorites Psalm 27:13-14 "I am still confident of this: I will see the goodness of the Lord in the land of the living. Wait for the Lord: Be strong and take heart and wait for the Lord" On the back Rob wrote me a little reminder, "So many times we think our timing is best, but really God's timing is perfect." (There is more to his message but it's mushy stuff) Now each time I look at my clock I will be reminded of my husbands love and God's perfect timing. Overall we have had a blessed Christmas day! 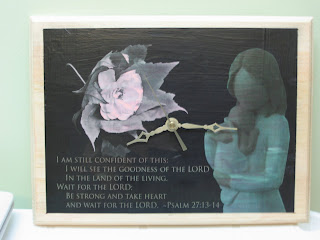 It has been pointed out to me that I am becoming a slogger (Blogger + slacker= slogger), and so I am going to remedy that right now and finally post something. Since it has taken so long to get something written down you might be expecting something deep, or meaningful from me. If that is so you may be disappointed. I have chosen to write something that hopefully will be a little entertaining.

Several weeks ago Angie a blogging friend I have never actually had the pleasure of meeting, tagged me to share seven weird or random things about myself. So here it goes:

1) I am married to an incredibly kind man. I've been struggling the last few days with the whole Christmas/no kids thing. Rob, recognizing that I was having a hard time left me a very sweet voicemail that helped me refocus myself from the pity party I was having to being grateful for the life I have.

2) My favorite candy is orange Tic Tacs. I can't get enough of them. Most people can eat one or two at a time making a little box last for days. I'm lucky if a little box lasts 5 minutes! Do you think there is a 12 step program for Tic Tacs?

3) I don't like to have my feet touched. I never have and probably never will.

4) The ring finger on both of my hands is double jointed which makes buying rings a pain since they have to be big enough to go over the knuckle but small enough so it doesn't spin around on the finger itself.

5) I make funny faces when I talk. Someone once told me I use faces as punctuation. My friend Judy enjoys laughing at me when I make my random faces so when I went out to California one time I gave her an envelope with a photographs of me making a funny faces, one for each day I was gone. Apparently she put them up on her refrigerator each day so she could start her day laughing.

6) I over emphasize my "ings". For example when I say singing it usually comes out more like "sing-ging". Apparently have done this since I was little and I usually don't even realize I've done it until someone starts laughing or imitates me.

7) My eating habits are based on the texture and look of food. For example I like apples, cinnamon, and the flavor of pie crust but I can't stand apple pie because its mushy. Even after 8+ years of marriage my husband is still amazed at what I will and will not eat and the reasons behind these choices.

So now I get to tag seven of you to share seven weird/random things about yourself on your blogs and I choose...Elizabeth, Bethany, Nicole, Shelly, Rob M., Christa, and Melissa. I put a link to each of these blogs so you can hold them accountable and see what they wrote. Who knows you might get tagged too!
Posted by Heather at 4:34 PM 5 comments: