Merry Christmas! Since I can't be with most of you today to celebrate Christ's birth I thought I would leave a little Christmas present for you in the form of a long overdue post.

It's hard to believe that 22 weeks have gone by since we first found out that I am pregnant. This whole process is going by so quickly, only three more months and we will get to meet our little boy. A lot has happened since I last posted here. First, and most noticiably - I actually finally look pregnant. My belly has finally popped out! In a related story, Rob got an early christmas present. The night before Christmas Eve Rob and I were watching tv together and I began to feel the baby moving rather strongly so I called Rob over to me to see if he would be able to feel it too. To our amazement he was! It was the first time that anyone other than me had been able to feel him move. I am so excited that Rob was the first. It was a great moment for us and a great ending to a big day for Rob. You see, earlier in the day Rob had gone out to do some Christmas shopping and made his first purchase for our son. You can see one of the tops he bought in the picture below. The other t-shirt is red and says Mom's Lil' Romeo. It is adorable! 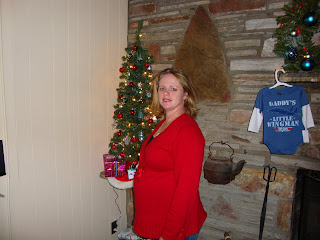 Another rather monumental event that has occured is that after a lot of research, prayer and discussion we have named our son! What did we choose? Nathan Glenn. Nathan means "He gave," it comes from Nathaniel which means "Gift from God". Glenn was Rob's Dad's name. We didn't realize until someone pointed it out to us, that the name we have chosen is setting up a new tradition in our family. Rob's middle name was his grandfather's name and now Nathan will follow in Rob's footsteps and be named after his grandfather. I like that our son's name not only has meaning but that it has a connection to family. It's been great being able to talk to our son by name and to use his name in conversation with friends. It's just made everything that much more real.

A couple of weeks ago I went with my neice Candace and my good friend Jennifer to register at Babies-R-Us. That was an incredible experience. It was so much fun to walk around the store choosing items for Nate. At the end of our shopping adventure I handed the scan gun in, turned to Jennifer and said "I guess this means I'm having a baby" we both laughed and then when we hugged Jennifer actually bounced off of my newly protruding belly!

Nate's nursery is beginning to come together. We have a rather large box containing his crib sitting in our sitting room and a dresser sitting in his bedroom. The bedding just arrived yesterday. Soon I will finish emptying all evidence of a guest/craft room so that painting can occur and the nursery transformation can be completed. I can't believe how quickly all of this is occuring. I am beginnning to feel the "we aren't ready/can we really do this" mmoments of panic. It all just seems a little overwhelming.

The next big events are quickly approaching. This Tuesday, Dec 29 marks the end of the second trimester and the beginning of the final portion of my pregnancy. Then on the next day we are going in for a 3D/4D ultrasound! We can't wait to see our little boy. To get a glimpse at whose eyes he will have, which of our noses grace his beautiful face. Then on the next Monday, Jan 4, we begin our childbirth classes!
Posted by Heather at 11:55 AM 3 comments: